I bought my first (and so far, only) 3D printer in 2017. I’d read everything I could, watched videos on the subject, and I thought I knew a thing or two. It took about a dozen test cubes to figure out what I needed to get a successful print and it’s been going strong (mostly) ever since. Now, four years later in 2021, I’ve learned a few things along the way that may – if you’re a new printer user – help you out. Part 1 is about hardware. 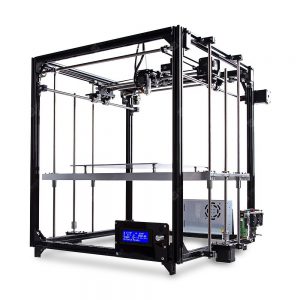 In 2017 most 3D printers were going for about $500 on the very low end. This would get you a machine read-to-go out of the box. I bought an FLSun 3D Cube kit for $350: completely unassembled, just a large box of parts from China and several pages of instructions that were sometimes difficult to follow but were mostly okay. I handed the box to my daughter as a science project (we un-schooled both kids) and let her have at it. She did most of the work, I came along after and did all the electronics.

The 3D cube is a beast. 260mm x 260mm x 350mm, about 12″ x 12″ x 18″, or large enough to print a human head (which I have done…well, a skull, anyway. You can read about Herman here on the site). Smallest thing I’ve ever printed was a 1/4″ universal greeblie. I’ve never tried to print a tabletop miniature, but I’m sure if I popped in a .2 nozzle and slowed it down it would do just fine. Mostly what I print are mechanical parts, like gears.

Buy a kit. Seriously. If you need to get up and running in a hurry, there are plenty of options, but a kit printer will teach you not only how a printer works by why it works the way it does. If something goes wrong (and it will) you’ll have a good grasp of how to fix it, or improve on it. It will make you a better maker.

Upgrade everything. I got what I paid for. Every part it came with except the frame and frame components were the cheapest the company could get away with and still have a functioning printer. Ultimately, with the upgrades I’ve made over time, the Cube actually cost about $500. I’ve upgraded the main board, added an external mosfet, upgraded the extruder, the drivers, and the power supply.

I’ve got some projects in mind where having a CNC router/engraver would be very useful. A 3D printer and a CNC router are basically the same machine in different configurations. I can use what I know to build one that precisely meets my needs.

I was able to take an old main board (an MKS GEN L V1 with a burned out heated bed connection) and repurpose it for a home made pad dye machine. (The video still shows the mechanical version. There’s another video on the way.)

I’m certain there’s going to come a point where I need another 3D printer. I’ve learned exactly what I need to shop for to get an out-of-the-box machine, but I’ll probably just build another one. BIGGER.